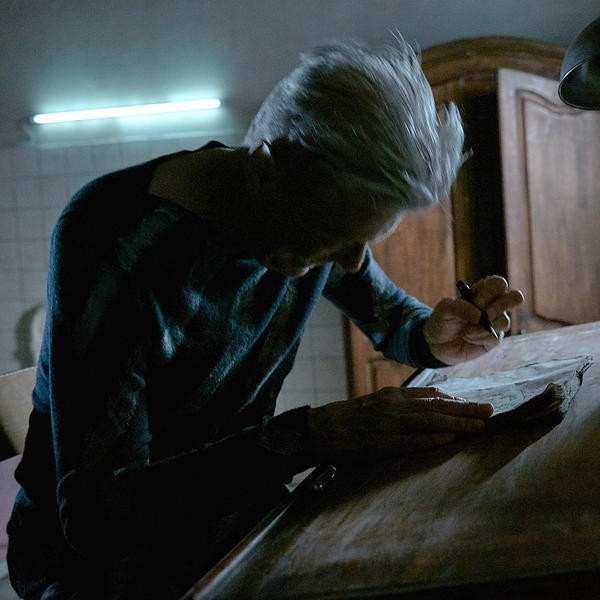 “Do not waste any more time not expressing yourself.”

“It’s staggering how differently a piece of art can be interpreted both before and after someone’s death. In the case of the late David Bowie’s music video for “Lazarus,” what may have been viewed as an innocuous 4 minutes of trippy entertainment turns into a disturbing, emotionally raw, premeditated goodbye letter.

I appreciate the impact “Lazarus” — and by extension the entirety of Bowie’s final album Blackstar — has and will have on his fans. We now understand that it was always meant as a final gift from Bowie to his fans.

But for me, that video is a warning.

There’s a scene about 3 minutes into the “Lazarus” video that’s difficult to watch. Scratch that, the entire video is difficult to watch now. Let’s call this scene harrowing. Bowie sits at a desk, frustrated and seemingly impatient to find the right words to jot down in the notebook in front of him. Suddenly a brief smile lights up his face and he begins enthusiastically scrawling on the pad in front of him.

A few seconds later, it’s as if Bowie is overwhelmed. He’s frantically writing now, face wrinkled in concentration, writing so furiously that his hand spills off the page and down the front of his desk.

To me, it’s screaming that Bowie had so much left to say. To contribute. To create. But time has run out.

There’s sage advice embedded here, a thinly veiled warning: Do not waste any more time not expressing yourself. Say what you need to say, boldly and without reservation. Nurture your creativity and don’t be shy about it. Stop constantly consuming and start creating before it’s too late, and that dark, mysterious wardrobe into nothingness consumes you.