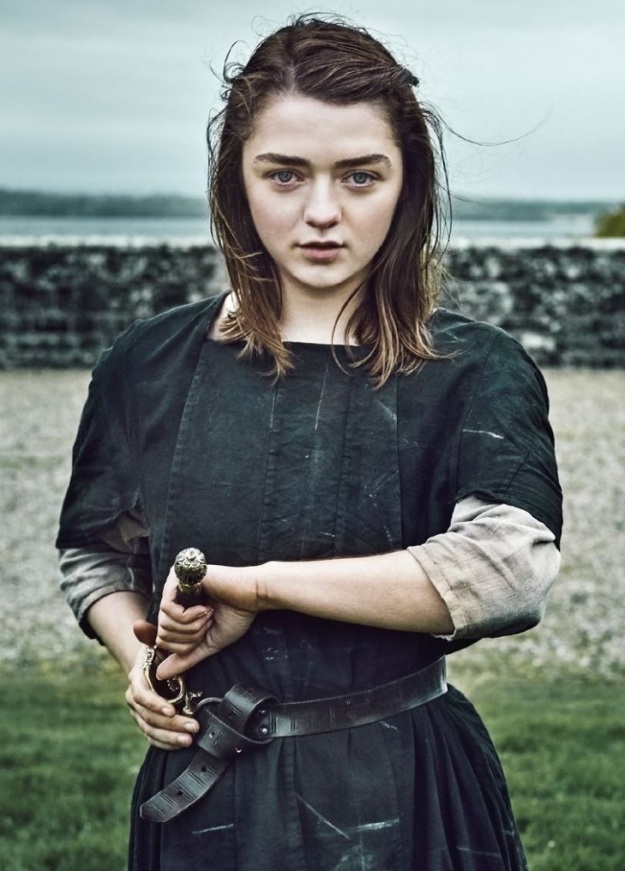 Arya Stark from the series “Game of Thrones” has fascinated me from the beginning. Now that we are at the end, I’m going to miss this character and the show itself. There is a rich, diverse, cast of characters in GoT, but I’ve loved watching Arya’s growth from the horrifying trauma she survived as a young girl, to the incredible woman she has become. This article addresses that very issue, and I found it to be full of insights for everyone. There are definitely spoilers here, so watch Season 8 first!

Here are the main five:

1. Her heightened instincts and ability to sense danger with alarming precision

As a child, Arya is trained by Syrio Forel (Miltos Yerolemou) to be as “swift as a deer, quiet as a shadow, calm as still water.” She also learns that fear cuts deeper than swords. These are all lessons that will inevitably help her to defeat the Night King. Arya’s training with Syrio lays the crucial foundation for her sword-fighting abilities, but it is actually the dangerous incidents she is forced to confront head-on in everyday life that challenge and hone her ability to identify and navigate danger skillfully. It is in her life experiences after her initial training that give her the platform to utilize these lessons. From living on the streets of King’s Landing to fighting a trained assassin from Braavos while temporarily blind, Arya learns to defend herself against a variety of perpetrators even when she is just a child on the cusp of womanhood.
Many of us are familiar with the term “hypervigilance,” a state of hyper-attunement we can develop to our surroundings due to trauma. Arya develops it in spades as she learns to evade danger in every corner. Often, hypervigilance is seen as a negative symptom of trauma, but actually, there are times our heightened attentiveness can be useful for our discernment of someone else’s true motives and character. According to researcher Willem Frankenhuis, people who have been abused in childhood can develop what Dr. Michael Ungar calls “an uncanny ability to detect threats in their environment, an enhanced capacity to learn new things, and even improved memories when it comes to paying attention to parts of their environment that are the most relevant.”

As therapist Athena Phillips writes in a 2012 article for GoodTherapy:
“Survivors of trauma regularly inform me of what they experience as something akin to having superpowers. The capacity to feel things other people can’t, to identify either the goodness or inherent evil in someone just by looking at them, or to ‘predict’ interpersonal outcomes are some of the new-found abilities people have described. People who have experienced trauma often indicate that they are able to pick up on covert human behaviors, and there is a great deal of trust in their capacity to intuit. Oftentimes, these powers really do exist; survivors have developed a discriminating aptitude for picking up on environmental cues that may have significance to them.”

Trauma creates fragments: It shatters the connection among memories, thoughts, emotions, and the self. Complex trauma survivors often find themselves confronting disparate inner parts that developed as a result of the traumas they endured; according to trauma experts, they must find ways to identify and integrate these parts in healthy ways in order to reach their true core calm and compassionate self. Much like any complex trauma survivor, Arya tries to escape the terrors of her childhood by taking on other identities and dissociating from her past except for her justified rage at those who murdered her family members. Arya’s need for vengeance ultimately creates a “protector self” that keeps her focused on a list of people she must kill rather than her true self and her grief.
Arya’s search for her own identity is also astutely represented by her brutal experiences at Braavos where she learns to become “no one” in her training to become a Faceless Man and assassin. There, she is beaten, terrorized, and challenged to fight back. Ironically, it is her journey to becoming no one that eventually leads her to own the fact that she is indeed someone. As she tells Jaqen H’ghar bravely and with conviction, “A girl is Arya Stark of Winterfell, and I am going home.” It is only when she integrates her darkness within her true self, recognizes her true power and strength from the traumas she has emerged from, that she decides she is going home. She goes home not just to her family but to herself.

3. Her post-traumatic growth and psychological self-mastery

As therapist Andrea Schneider notes shrewdly in her Game of Thrones blog series, characters who have endured trauma on this show can exhibit promising signs of post-traumatic growth, the positive psychological changes we benefit from after enduring adversity. While regaining a pre-trauma identity is next to impossible for characters like Arya, her post-traumatic growth is tremendous.
Not only does Arya learn to incorporate the life lessons of her trauma into her sword fighting and archery skills, she learns psychological mastery. She learns the art of resourcefulness even when she has nothing. She learns how to stealthily collect information (like when she does when acting as cupbearer to Tywin Lannister) to further her journey. She learns a great deal about patience, self-control, confidence, observing rather than reacting, and how to put herself in the mindset of her attackers and predators around her so she can anticipate what they will do—and can preemptively strike. As a result of her traumas, she gains wisdom and skill sets beyond her years, which many adults in the show are still struggling to obtain.
Arya has no explicit desire to be a leader or queen, but her ability to lead due to her experiences make her more fit for the throne than many others who seek it for personal power. It is her desire for justice, rather than power, that makes her unstoppable. Complex trauma survivors experience many of these same psychological benefits as they process, heal, and grow from their traumas. They can learn to navigate life with an increased sense of gratitude, fortitude, and develop a habit for making the best of their circumstances to create success and joy at an even more intense level than someone who has never been traumatized. As they heal, they have an incentive, drive, and determination that can far surpass that of the average person, as well as a greater sense of meaning.
It is only when Arya Stark integrates her darkness within her true self and recognizes her true power that she decides she is going home.

4. Her darkness has to be integrated in order to fully own her light.

Arya is a curious character in that she is not encouraged to forgive those who have wronged her or took the lives of her loved ones. That is what makes her one of the most phenomenal female characters on television: her darkness is not minimized or sugarcoated. It is recognized, along with her authentic outrage, in all of its unflinching glory. And skilled trauma therapists agree: forced, premature forgiveness can actually hinder a survivor’s journey because it invalidates how we really feel and does not give us the time or space to actually process our traumas.

Trauma therapist Anastasia Pollock puts it this way:
“The people I work with in the therapy room are resilient and courageous. They are able to work through their traumas, but many get caught up on one point: They believe they are supposed to forgive the perpetrator but can’t seem to get there. This is what I tell them: You don’t have to forgive in order to move on. Emotions are important and automatic. When we can acknowledge and appreciate even the darkest, most negative-feeling emotions, they often soften and release. As soon as I say, ‘You don’t have to forgive,’ the person usually breathes a sigh of relief.”

Unlike a woman who turns the other cheek and goes immediately into love and light without any kind of transformation beforehand, Arya turns to her sword, Needle, to deliver a much-needed message to perpetrators like Walder Frey (David Bradley). The North remembers, and so does she. She avenges her loved ones one by one, and when she does, we can’t help but cheer from the sidelines.
Although in real life this form of vigilante justice is unrealistic, not recommended and quite gory (none of us should be baking our enemies into pies—we’d have a more productive time processing our traumas in therapy), we learn an important lesson about trauma: it cannot be spiritually bypassed. Our so-called “dark” emotions must be acknowledged in order to fully own our true light. The outrage and rage we feel must be seen, heard, experienced, confronted and (while perhaps not shown on this show) healthily expressed in order to be healed. Whether Arya’s quest for revenge is misplaced is up for debate, but one thing is for sure: this young woman is not your typical depiction of a trauma survivor who forgives and forgets her way into healing. Yet her intense emotions are an all too real part of this journey.

5. Her resilience and strength would not be the same without her experiences.

While none of us would ever volunteer for the traumas we experienced, we can’t help but admit that we would not be who we are without them. We can still validate and honor the injustice of our traumas while acknowledging the internal resources and coping skills they granted us. Trauma can give us the strength and resilience of a sumo wrestler, and Arya is no exception. As whole families are killed, legacies wiped out, and kingdoms come under siege, Arya remains—one of the few survivors of her family. A weary traveler and warrior, she is forced to confront what no child should have to endure. But she does endure, and she is better for it.
At the end, it is this little girl who grows up to be the warrior woman—who ultimately conquers the darkness. No one expected her or saw her coming. Everyone underestimated her. And therein lies her greatest power. It was the traumas of her past that gave her the ability to defeat the Night King, to avenge her loved ones, and to protect her community. Complex trauma survivors, too, are capable of this same kind of resilience—and the ability to give back what they never received.
Arya is every little girl who grew up in terror and trauma. Who survives impossible situations through her resilience, grit, talent, and determination. Whose identity is previously in fragments, only to become whole as she comes into the woman she was always meant to be. And yes, she is truly ruthless when it comes to her enemies. Yet it is perhaps her ability to own her demons that make her even more powerful when she’s avenging her loved ones, enacting some sweet justice and saving the world. We can all learn life lessons about trauma from this brilliant, multifaceted and truly one of a kind character. She is all of us who have survived—and thrived.
This article originally appeared on Psych Central as “5 Powerful Lessons Arya Stark from Game of Thrones Teaches Us About Complex Trauma Survivors” 🔥

by Shahida Arabi: a bestselling author of three books on emotional abuse and trauma.