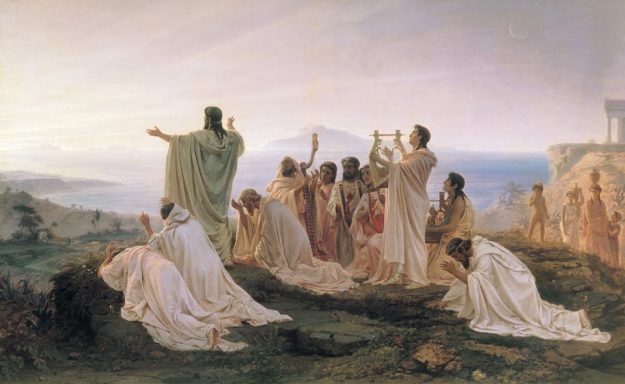 Every year at Christmas, I think about the ancient traditions that usher in the winter season. These folk beliefs form the foundation of how we celebrate the holidays in modern times. Why do we bring an evergreen tree into our livingrooms? Who is St. Nicholas? Why is Christmas red and green?

If you take a step back, keep an open mind and do some research, it’s easy to see that many of these traditions are symbols for winter survival. An evergreen tree stays green despite being blanketed by snow. The Christmas lights we hang are a representation of the fire of life going strong through the winter darkness. The gathering together of family to feast and exchange gifts comes from our interdependent, tribal origins. And the celebration of the birth of Jesus comes from the Winter Solstice.

December 21st is the longest night and the shortest day of the year. It is brought about by the turning of the Earth and happens every year without fail, just as the Sun rises and sets everyday.  At the Winter Solstice, the Sun is “reborn” for the coming year and the days literally become longer. The light increases. Not surprising that Jesus’s birthday is celebrated near the solstice, because it is synonymous with the birth of light.

There is no solid evidence that Jesus ever existed on earth, but the story of his life mirrors many ancient myths from cultures all over the world. It is the story of the sacrificed King, who’s death brings about the bounty of crops and the survival of the people.

From the “Women’s Encyclopedia of Myths and Secrets” by Barbara Walker: “It seems Jesus was not one person but a composite of many… He was eaten in the form of bread as were Adonis, Osiris, Dionysus and others… Like Attis, Jesus was sacrificed at the Spring Equinox and rose again from the dead on the third day, when he became God and ascended to heaven. Like Orpheus and Heracles, he ‘harrowed hell’ and brought a secret of eternal life, promising to draw all men with him up to glory (John 12:32). Like Mithra and all the other solar gods, he celebrated a birthday nine months later at the Winter Solstice… ”

It’s more than interesting, it’s important. It’s vital to our sense of humanity – to be open to learning how our social structures developed. It’s more important than ever this Christmas to love our fellow man and respect his path. I hope all of you have a wonderful Christmas holiday. The article below is a bit of fun too 🙂 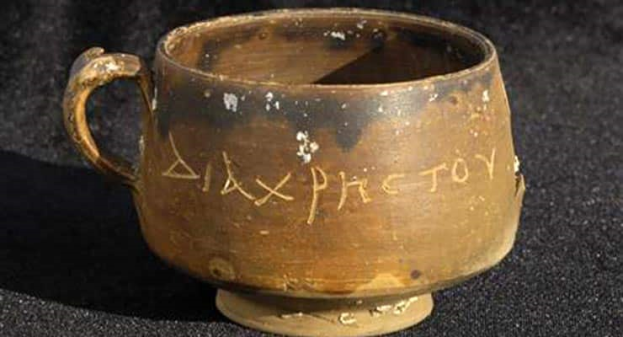 bowl from the late 2nd century B.C. which reads: “DIA CHRSTOU O GOISTAIS,” which has been interpreted to mean either, “by Christ the magician” or, “the magician by Christ.”

A team of scientists led by renowned French marine archaeologist Franck Goddio recently announced that they have found a bowl, dating to between the late 2nd century B.C. and the early 1st century A.D., that is engraved with what they believe could be the world’s first known reference to Christ.

If the word “Christ” refers to the Biblical Jesus Christ, as is speculated, then the discovery may provide evidence that Christianity and paganism at times intertwined in the ancient world.

Team leader Frank Goddio of the Oxford Center for Maritime Archaeology, said that “It could very well be a reference to Jesus Christ, in that he was once the primary exponent of white magic.”

The jury’s still out on whether the bowl is actually referring to the real Jesus Christ, but there’s no hiding the fact that even the prophet’s contemporaries compared his abilities to sorcery (Jesus was often accused of using demons to do his bidding).

Similar to the Jewish mystic Elijah (the undisputed patron of Lurianic Kabbalah and rider of fire chariots), the real Jesus was a wonder-worker who could freely go in and out of Super-Saiyan-mode. After his death, he was often linked with the Roman cult-hero Mithras and the magician Apollonius of Tyana, both pagan figures. Jesus’ “magical” side certainly wasn’t always unknown to modern thinkers. It was the 16th century philosopher Giordano Bruno who was one of the first to suggest that the real Jesus was just an extremely talented mage.

The engraving ‘could very well be a reference to Jesus Christ, in that he was once the primary exponent of white magic.’
Was Jesus Christ the magician? Times of Jesus Christ were imbued with magic and in the Hellenistic period of time, the lands around the Mediterranean have mixed different religions, traditions, philosophies and superstitions.

The Egyptians, Greeks, Romans and Jews were convinced that it is possible to possess the power of the gods, demons and spirits, and use it for your own purposes.

The ‘Book of Matthew’ refers to “wisemen,” or Magi, believed to have been prevalent in the ancient world. Egyptologist David Fabre, a member of the European Institute of Submarine Archaeology says the bowl is also very similar to one depicted in two early Egyptian earthenware statuettes depicting a soothsaying ritual.

“It has been known in Mesopotamia probably since the 3rd millennium B.C.,” Fabre said. “The soothsayer interprets the forms taken by the oil poured into a cup of water in an interpretation guided by manuals. The “magus” could have practiced fortune telling rituals using the bowl to legitimize his supernatural powers by invoking the name of Christ,” according to Goddio and Fabre.

“It is very probable that in Alexandria they were aware of the existence of Jesus” and of his associated legendary miracles, such as transforming water into wine, multiplying loaves of bread, conducting miraculous health cures, and the story of the resurrection itself,” according to Goddio.

The Bible reports that Jesus was accused of practicing magic, and the second century Roman philosopher Celus is quoted in the writings of the early Christian apologist Origen as saying that Jesus learned the arts of magic on Egypt, and then returned to his own country with these acquired skills.”