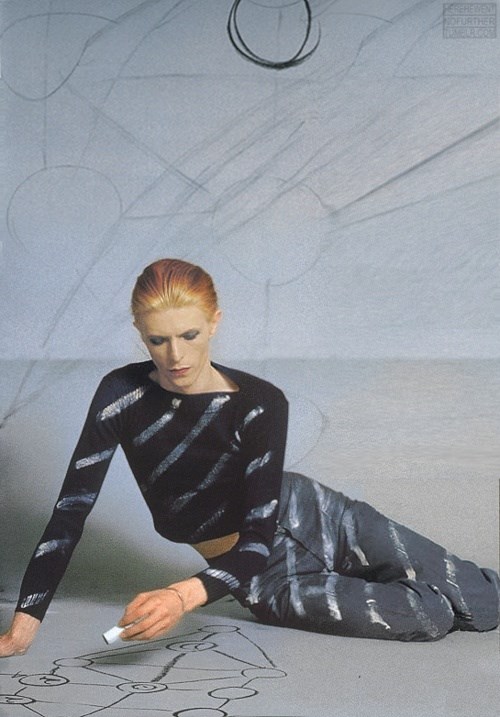 I don’t know how deeply David Bowie was in to Magick, but it’s clear in the 70’s he was immersed in it. I’ve read he was having drug and alcohol issues at the time, but I find this period of his life in Los Angeles very interesting nonetheless.

Like many people, Bowie had an enormous impact on my life and he’s one of my favorite artists. I was born in 1964 and I grew up listening to him. He has always been there in my life. I can’t remember any point in my life where I wasn’t listening to his music.

As a teenager I studied movement and I wanted to be a ballerina. When “Ziggy Stardust and the Spiders from Mars” came out in the early 80’s I was there at the Lumiere theater off Polk Street, watching the movie 50 times over. In my late 20’s I studied theater, movement, and world religions in San Francisco. Inspired by Bowie’s example, I became a guitarist and singer for my own rock persona – Bettie Black. I wrote and released my own music – always inspired by him.  I find his exploration of magick personal and meaningful. I also study gnosticism and the Tree of Life from Jewish mystical traditions.

I’ve read many observations from various people, and I’ve come across some interesting insights! I thought I’d put them all here to share with interested folks.

“My overriding interest was in Kabbalah and Crowleyism. That whole dark and rather fearsome never-world of the wrong side of the brain.”

From “Bowie on Bowie” by Sean Egan

from Secret Sun Blog: “Apparently David Bowie, despite being heavily interested in the Occult and even referencing Crowley lyrically in the 1971 song Quicksand, was actually of the mind that AC was a fraud (from a 1997 interview in NME):

Q: “So were you involved in actual devil worship?”
A: “Not devil worship, no, it was pure, straightforward, old-fashioned magic.”
Q: “The Aleister Crowley variety?”
A: “No, I always thought Crowley was a charlatan. But there was a guy called [Arthur] Edward Waite who was terribly important to me at the time. And another called Dion Fortune who wrote a book called ‘Psychic Self-Defense‘. You had to run around the room getting bits of string and old crayons and draw funny things on the wall, and I took it all most seriously, ha ha ha ! I drew gateways into different dimensions, and I’m quite sure that, for myself, I really walked into other worlds. I drew things on walls and just walked through them, and saw what was on the other side!”

I really don’t know much about Waite, but in a bit of research (Wikipedia, so you know, take that as you may) came upon the info that Crowley apparently hated Waite and mocked him publically in his writing. Checked, and in Bowie’s list of favorite books, there are none by Crowley. The only Occult book listed is Transcendental Magic: Its Doctrine and Ritual by Elphias Levi.”

How a 1974 image reappeared in Bowie’s final music video.

Imagine getting the opportunity to hold a private photo session with David Bowie at the height of his stardom. We’re talking post “Ziggy Stardust” and “Aladdin Sane,” with “Pin Ups” and “Diamond Dogs” still on the horizon. Imagine you had an entire evening to play dress up with the iconic shapeshifter and capture the manifold personas he embodied so swiftly yet completely.

And suppose, over 40 years later, after the iconic artist’s death, you return to those photos you took so long ago and notice what seems to be a message. A message that reappears throughout his later works, culminating with the “Lazarus” video off his final album “Blackstar,” that perhaps illuminates the artist’s feelings about death and immortality.

This is what happened to photographer Steve Schapiro, who spent one fateful night in 1974 photographing Bowie in his Los Angeles studio. “From the moment Bowie arrived, we seemed to hit it off. Incredibly intelligent, calm, and filled with ideas,” Schapiro recalled in a statement. “He talked a lot about Aleister Crowley, whose esoteric writings he was heavily into at the time. When David heard that I had photographed Buster Keaton, one of his greatest heroes, we instantly became friends.”

The two collaborated on many striking images, each transforming Bowie into a distinct character, as unique and otherworldly as a mythical creature. Yet a particular ensemble, the one pictured above and featured on Bowie’s 1976 album “Station to Station,” holds special significance.

In the image, Bowie dons a navy blue striped body suit and, crouched on the floor, doodles diagrams of Kabbalah’s Tree of Life, a series of 10 spiritual emanations. Lyrics from the title track “Station to Station” echo the language of Kabbalist symbols and beliefs. “Here are we, one magical movement from Keter to Malkuth,” Bowie sings, with Keter (the Crown) and Malkuth (the Kingdom) being the first and last virtues on the Tree of Life.

In his last music video, “Lazarus,” from album “Blackstar” — regarded by many as a cryptic goodbye letter to his fans — Bowie whips out the exact jumpsuit worn in the 1974 image, visible around the two-minute mark. Just as Bowie doodled obsessively in the ‘70s photo shoot, in 2016 Bowie scribbles feverishly in a notebook, heightening in intensity until finally he appears to come to a conclusion, finishing his notes and talking away. (In Bowie style: backward.)

As Albin Wantier interprets in his introduction to Schapiro’s photography book: “He appears to have found the meaning he has been searching for. The connection between both images, 40 years apart, is stunning … He has resolved his enigma, and the curtain can fall at last.”

A close-up of the writing in Bowie’s notebook reveals a trail of symbols. Wantier analyzed these symbols in conjunction with some appearing on a vinyl edition of “Blackstar,” all of which resembled the doodles from the 1974 shoot. The “Blackstar” images, Wantier determined after checking with a friend, were part of a chemical formula depicting the various stages of the nuclear fusion, which leads to the formation of a sun. Or perhaps, a blackstar.

“In the ‘Lazarus’ video, Bowie resolves the enigma of life, which he had been endeavoring to do since 1976,” Wantier summarizes. “His life, which was indistinguishable from his work, led him to enact various characters of his own devising; his life was in itself a work of art. Now that he has finished, Bowie can close the book. However, the last chapter does not end with the artist’s passing — that would be too simple.”

While Bowie’s physical body is no longer with us, his creative energy has catalyzed to create a cosmic eruption, felt around the world, that can never be undone. “David Bowie is not the kind to just disappear just like that from our world,” Wantier writes. “The chemical symbols that accompany the ‘Blackstar’ release point where he’s going: an artistic nuclear fusion of two elements that creates enough energy to make a sun.”

While many acknowledged the poetry in Bowie’s final album, his requiem, and its tremendous impact as his final work of art on this earth, few pieced together the fact that the roots of “Blackstar” trace back to 1974, when a photographer and the world’s biggest rock star became fast friends and spent a single evening creating, contorting and doodling away. As Bowie’s producer Tony Visconti put it: “His death was not different from his life — a work of Art.”

See the image that started it all, as well as the many other never before published images captured that night, in Bowie. A preview of the book is featured below, with all photographs by Steve Schapiro and published by powerHouse Books.