the seedy Quartier Pigalle of Paris

Great article that takes you inside the wild Moulin Rouge – a cabaret that opened in 1889 in Paris. The club was the site of flamboyance, decadence and diversity, setting the pace for the underground art and dance scene. The pictures are fantastic!

In October 1889, Paris was buzzing with the opening of a new music hall – which claimed it would become a temple to song and dance.

With its flamboyant red windmill, the building stood out against the Parisian skyline and from the outset the eccentric establishment aimed at wowing its guests with the exploits inside.

The Moulin Rouge swiftly became notorious for its staff of young can-can girls who performed routines that were as flexible as the rich patrons’ morals.

Its exotic reputation was fueled further by the addition of a giant wooden elephant in 1900 that featured a room in its belly for intimate dances.

Many of the club’s performers quickly became prominent characters in the infamous nightclub, including Mistinguett, who was said to have insured her legs for 500,000 francs.

Nowadays Moulin Rouge is still a popular cabaret attraction, and its colorful legacy has been immortalized in Baz Luhrmann’s 2001 film as well as in the retrospective photographs that have survived to this day. 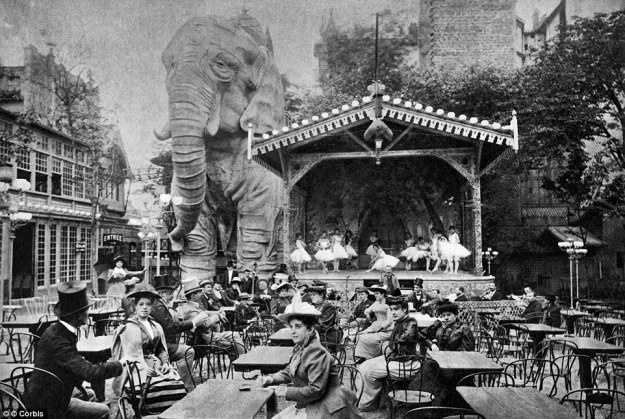 Midnight in Paris: Its notorious reputation was fuelled further by the addition of a giant wooden elephant in 1900 which had a room in its belly for intimate dances

1 thought on “Inside the Moulin Rouge”