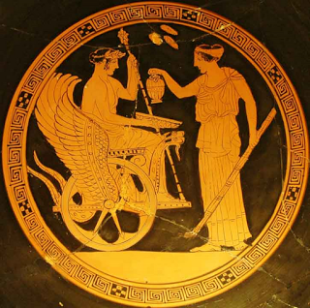 “Ancient moon priestesses were called virgins. ‘Virgin’ meant not married, not belonging to a man – a woman who was ‘one-in-herself’. The very word derives from a Latin root meaning strength, force, skill; and was later applied to men: virile. Ishtar, Diana, Astarte, Isis were all called virgin, which did not refer to sexual chastity, but sexual independence. And all great culture heroes of the past, mythic or historic, were said to be born of virgin mothers: Marduk, Gilgamesh, Buddha, Osiris, Dionysus, Genghis Khan, Jesus – they were all affirmed as sons of the Great Mother, of the Original One, their worldly power deriving from her. When the Hebrews used the word, and in the original Aramaic, it meant ‘maiden’ or ‘young woman’, with no connotations to sexual chastity. But later Christian translators could not conceive of the ‘Virgin Mary’ as a woman of independent sexuality, needless to say; they distorted the meaning into sexually pure, chaste, never touched.”— Monica Sjoo, The Great Cosmic Mother: Rediscovering the Religion of the Earth